Varmuudella näin tulee tapahtumaan.
“I think we have to find out what happened first. Here we go again with, you know, you’re guilty until proven innocent. I don’t like that. "
Donald Trump
Ylös

PS. Vajakki ei tiedä sitä itse, eikä välttämättä tee asioita pahuuttaan...
It is better to live ten years as a lion than one day as a lamb
Ylös

Tämähän toki oli yksi vaalilupauksista että valejournalistit tuodaan julkisuuteen.
“I think we have to find out what happened first. Here we go again with, you know, you’re guilty until proven innocent. I don’t like that. "
Donald Trump
Ylös

When the annals of mistakes and abuses in the FBI’s Russia investigation are finally written, Bruce Ohr almost certainly will be the No. 1 witness, according to my sources.

The then-senior Department of Justice (DOJ) official briefed both senior FBI and DOJ officials in summer 2016 about Christopher Steele’s Russia dossier, explicitly cautioning that the British intelligence operative’s work was opposition research connected to Hillary Clinton’s campaign and might be biased.

Ohr’s briefings, in July and August 2016, included the deputy director of the FBI, a top lawyer for then-Attorney General Loretta Lynch and a Justice official who later would become the top deputy to special counsel Robert Mueller.

At the time, Ohr was the associate deputy attorney general. Yet his warnings about political bias were pointedly omitted weeks later from the Foreign Intelligence Surveillance Act (FISA) warrant that the FBI obtained from a federal court, granting it permission to spy on whether the Trump campaign was colluding with Russia to hijack the 2016 presidential election.

Ohr’s activities, chronicled in handwritten notes and congressional testimony I gleaned from sources, provide the most damning evidence to date that FBI and DOJ officials may have misled federal judges in October 2016 in their zeal to obtain the warrant targeting Trump adviser Carter Page just weeks before Election Day.

They also contradict a key argument that House Democrats have made in their formal intelligence conclusions about the Russia case.

Since it was disclosed last year that Steele’s dossier formed a central piece of evidence supporting the FISA warrant, Justice and FBI officials have been vague about exactly when they learned that Steele’s work was paid for by the law firm representing the Clinton campaign and the Democratic National Committee (DNC).

A redacted version of the FISA application released last year shows the FBI did not mention any connection to the DNC or Clinton. Rather, it referred to Steele as a reliable source in past criminal investigations who was hired by a person working for a U.S. law firm to conduct research on Trump and Russia.

The FBI claimed it was “unaware of any derogatory information” about Steele, that Steele was “never advised … as to the motivation behind the research” but that the FBI “speculates” that those who hired Steele were “likely looking for information to discredit” Trump’s campaign.

Yet, in testimony last summer to congressional investigators, Ohr revealed the FBI and Justice lawyers had no need to speculate: He explicitly warned them in a series of contacts, beginning July 31, 2016, that Steele expressed biased against Trump and was working on a project connected to the Clinton campaign.
Ohr had firsthand knowledge about the motive and the client: He had just met with Steele on July 30, 2016, and Ohr’s wife, Nellie, worked for Fusion GPS, the same firm employing Steele.

“I certainly told the FBI that Fusion GPS was working with, doing opposition research on Donald Trump,” Ohr told congressional investigators, adding that he warned the FBI that Steele expressed bias during their conversations.

“I provided information to the FBI when I thought Christopher Steele was, as I said, desperate that Trump not be elected,” he added. “So, yes, of course I provided that to the FBI.”

When pressed why he would offer that information to the FBI, Ohr answered: “In case there might be any kind of bias or anything like that.” He added later, “So when I provided it to the FBI, I tried to be clear that this is source information, I don’t know how reliable it is. You’re going to have to check it out and be aware.”

Ohr went further, saying he disclosed to FBI agents that his wife and Steele were working for the same firm and that it was conducting the Trump-Russia research project at the behest of Trump’s Democratic rival, the Clinton campaign.

“These guys were hired by somebody relating to, who’s related to the Clinton campaign and be aware,” Ohr told Congress, explaining what he warned the bureau.

Perkins Coie, the law firm that represented both the DNC and the Clinton campaign during the 2016 election, belatedly admitted it paid Fusion GPS for Steele’s work on behalf of the candidate and party and disguised the payments as legal bills when, in fact, it was opposition research.

When asked if he knew of any connection between the Steele dossier and the DNC, Ohr responded that he believed the project was really connected to the Clinton campaign.

“I didn’t know they were employed by the DNC but I certainly said yes that they were working for, you know, they were somehow working, associated with the Clinton campaign,” he answered.

“I also told the FBI that my wife worked for Fusion GPS or was a contractor for GPS, Fusion GPS.”

Ohr divulged his first contact with the FBI was on July 31, 2016, when he reached out to then-Deputy Director Andrew McCabe and FBI attorney Lisa Page. He then was referred to the agents working Russia counterintelligence, including Peter Strzok, the now-fired agent who played a central role in starting the Trump collusion probe.

But Ohr’s contacts about the Steele dossier weren’t limited to the FBI. He said in August 2016 — nearly two months before the FISA warrant was issued — that he was asked to conduct a briefing for senior Justice officials.

Those he briefed included Andrew Weissmann, then the head of DOJ’s fraud section; Bruce Swartz, longtime head of DOJ’s international operations, and Zainab Ahmad, an accomplished terrorism prosecutor who, at the time, was assigned to work with Lynch as a senior counselor.

Ahmad and Weissmann would go on to work for Mueller, the special prosecutor overseeing the Russia probe.

When Republicans, in early 2018, first questioned Ohr’s connections to Steele, Democrats on the House Intelligence Committee sought to minimize the connection, insisting he only worked as an informer for the FBI after Steele was fired by the FBI in November 2016.

The memo from Rep. Adam Schiff’s (D-Calif.) team claimed that Ohr’s contacts with the FBI only began “weeks after the election and more than a month after the Court approved the initial FISA application.”

But Ohr’s testimony now debunks that claim, making clear he started talking to FBI and DOJ officials well before the FISA warrant or election had occurred.

And his detailed answers provide a damning rebuttal to the FBI’s portrayal of the Steele material.

In fact, the FBI did have derogatory information on Steele: Ohr explicitly told the FBI that Steele was desperate to defeat the man he was investigating and was biased.

And the FBI knew the motive of the client and did not have to speculate: Ohr told agents the Democratic nominee’s campaign was connected to the research designed to harm Trump’s election chances.

Such omissions are, by definition, an abuse of the FISA system.

Don’t take my word for it. Fired FBI Director James Comey acknowledged it himself when he testified last month that the FISA court relies on an honor system, in which the FBI is expected to divulge exculpatory evidence to the judges.

“We certainly consider it our obligation, because of our trust relationship with federal judges, to present evidence that would paint a materially different picture of what we're presenting,” Comey testified on Dec. 7, 2018. “You want to present to the judge reviewing your application a complete picture of the evidence, both its flaws and its strengths.”

Comey claims he didn't know about Ohr's contacts with Steele, even though his top deputy, McCabe, got the first contact.

But none of that absolves his FBI, or the DOJ for that matter, from failing to divulge essential and exculpatory information from Ohr to the FISA court.

John Solomon is an award-winning investigative journalist whose work over the years has exposed U.S. and FBI intelligence failures before the Sept. 11 attacks, federal scientists’ misuse of foster children and veterans in drug experiments, and numerous cases of political corruption. He is The Hill’s executive vice president for video.

Trump proposes amnesty. We voted for Trump and got Jeb

Most voters continue to favor strongly controlled borders and reject House Speaker Nancy Pelosi’s charge that it is immoral for the United States to build a border wall.

The latest Rasmussen Reports national telephone and online survey finds that 53% of Likely U.S. Voters think it is better for the United States to tightly control who comes into the country. Thirty-nine percent (39%) disagree and say it is better to open our borders to anyone who wants to come here as long as they are not a terrorist or a criminal. (To see survey question wording, click here.)

Voters continue to measure illegal immigration by how much crime and financial strain it brings into the United States.

A new Rasmussen Reports national telephone and online survey finds that 52% of Likely U.S. Voters think illegal immigrants are a significant strain on the U.S. budget. That’s unchanged from July and in line with the 49% who felt the same way in early 2017. This finding is down, however, from the 67% who thought illegal immigrants were a significant strain on the budget when Rasmussen Reports first asked this question in March 2010. (To see survey question wording, click here.)

Voters don’t care too much for the federal government, and the number who say they have been badly hurt by the continuing government shutdown remains small.

The latest Rasmussen Reports national telephone and online survey finds that just 10% of Likely U.S. Voters say they have been personally affected by the shutdown in a major way. Another 35% say that in terms of their own personal life, they have felt a minor impact, while 54% say the shutdown has had no impact at all on them. (To see survey question wording, click here.) 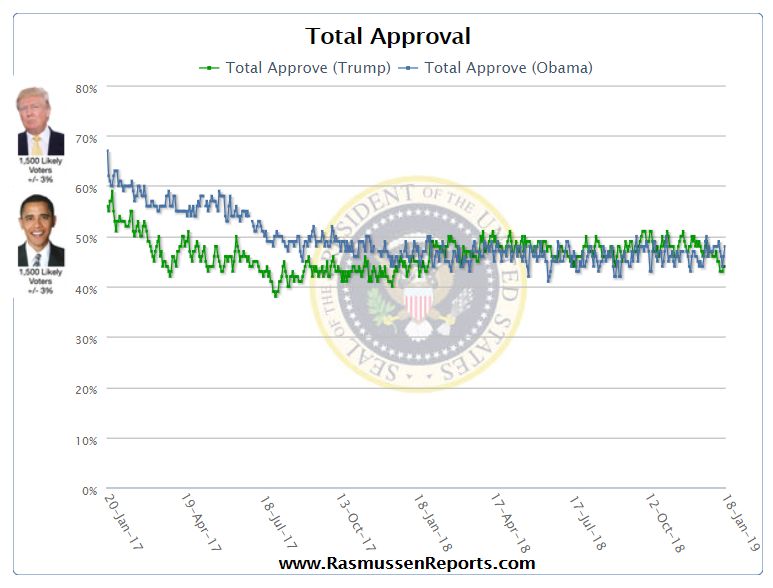 ÖÖÖÖ ÖÖÖ ai jaa
“I think we have to find out what happened first. Here we go again with, you know, you’re guilty until proven innocent. I don’t like that. "
Donald Trump
Ylös
Vastaa Viestiin
2216 viestiä