Respect/Google kirjoitti:Three weeks ago, a man with a Russian diplomatic passport arrived at Václav Havel Airport from Russia. A car of the local Russian diplomatic corps was waiting for him and took him to the embassy in Prague's Dejvice. Sources of Respect claim that the passenger traveled with a briefcase in which he was supposed to have the deadly poison ricin. The security forces knew about the arrival of the traveler and evaluated the men as an immediate risk for a pair of Czech politicians, whose actions in recent months have provoked the wrath of Moscow.

These are the mayor of Prague 6, Ondřej Kolář, who had a statue of the controversial Russian military leader Ivan Konev removed from Dejvice, and the mayor of Prague, Zdeněk Hřib, whose office was renamed the square in front of the Russian embassy after the assassinated Russian opposition politician Boris Nemtsov. Both men were given all-day protection after the arrival of the said traveler.

Russia's Defense Minister Sergei Shoigu called for Kolář's prosecution after President Putin signed a law to damage war graves and monuments. Bronze Konev has been standing in Prague since 1980, but for some Praguers it is an unacceptable celebration of a man co-responsible for the post-war arrest and deportation of Czechoslovak citizens of Russian origin who fled here from Stalin. Jim Kolář complied by moving the statue from a public place to the depository.

The poison traveler, according to Respect sources, is supposed to be a member of the Russian secret service. According to information from the same source, his other colleagues were to set out from Russia to various parts of Europe a month and a half ago. Russian agents…

A Czech politician in hiding amid allegations of a Russian assassination plot says he believes the threat against him is credible and he fears for his life.

Three Prague politicians are under 24-hour police guard because of the alleged plot to poison them - claims categorically denied by Moscow.

"It's very difficult," said Ondrej Kolar, mayor of Prague's sixth district, speaking to the BBC from an undisclosed location under heavy police guard.

"I haven't seen my children for quite a long time, and they haven't seen me. Even my family doesn't know where I am," he told me via Skype, now his only means of communication with the outside world.

I vaguely know Mr Kolar. We both once worked at New York University in Prague.

His bright blue cardboard backdrop, with the words "Prague 6 Municipal District", looked familiar. Then I remembered.

The last time we met was shortly before a vote at Prague 6 district council to move a 1980 bronze statue of Soviet Marshal Ivan Konev. 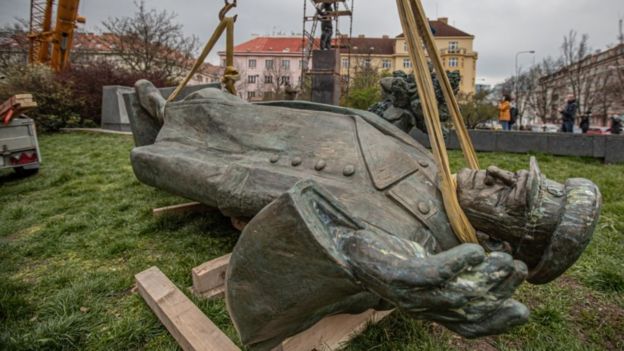 The World War Two commander certainly freed much of Czechoslovakia from the Nazis, but historians agree he was not, as the statue's plinth once claimed, the "liberator of Prague".

Konev was a controversial figure who oversaw the Soviets' brutal suppression of the 1956 Hungarian Uprising and helped crush the Prague Spring of 1968.

The Russian government has reacted angrily to the monument's removal and has even threatened legal action.

Mayor Kolar was leading the council meeting and I had to wait. I sat in an antechamber - under a large, bright blue screen. He had apparently taken the screen to his undisclosed hiding place.

Echoes of a spy novel

The nature of that threat, first elucidated in a brief but explosive piece in the investigative Czech weekly Respekt, is straight out of a spy novel.

According to the report, he was picked up by a car bearing Russian diplomatic plates and taken to the Russian embassy, not far from Ondrej Kolar's office in Prague 6.

Czech intelligence services, Respekt claimed, deemed the man to be a direct threat to two city politicians who had angered Moscow in recent months: Ondrej Kolar, and Zdenek Hrib, the capital's mayor.

Mr Hrib recently oversaw the renaming of the area in front of the Russian embassy as Boris Nemtsov Square, honouring a prominent opponent of President Vladimir Putin murdered in 2015.

The denials from Russia were swift and unequivocal. The report, said the embassy, had "absolutely no basis". Mr Putin's spokesman Dmitry Peskov dismissed the news report as "fake".

Nor was there confirmation or much in the way of comment from Czech authorities.

A foreign ministry spokeswoman told the BBC they would "not comment on the leaks published in the media", although she did confirm that an accredited Russian diplomat had arrived at the airport, presumably on one of the few flights still running during the coronavirus lockdown.

As the jaw-dropping allegations flashed around the world, prompting a mixture of outrage, disbelief and ridicule, journalists and diplomats began working their phones. There was - there is - persistent scepticism, including amongst seasoned Russia-watchers.

Assassinating the mayor of a European capital would be tantamount to an act of war. It would be so counter-productive to the Kremlin it would be simply insane.

From a source within Czech counter-intelligence, there was… not confirmation exactly. But far from a denial. The media reports, the source told me, were grounded in factual information.

Ondrej Kolar is not taking any chances.

"We know what happened in the past with the Russian secret service and its agents trying to poison Mr Skripal with a nerve agent," he told the BBC.

Russian former spy Sergei Skripal and his daughter were poisoned in Salisbury in 2018, by agents thought to have been sent by Russian intelligence.

"When they have the guts to do this in the United Kingdom, why not do it in Prague?"